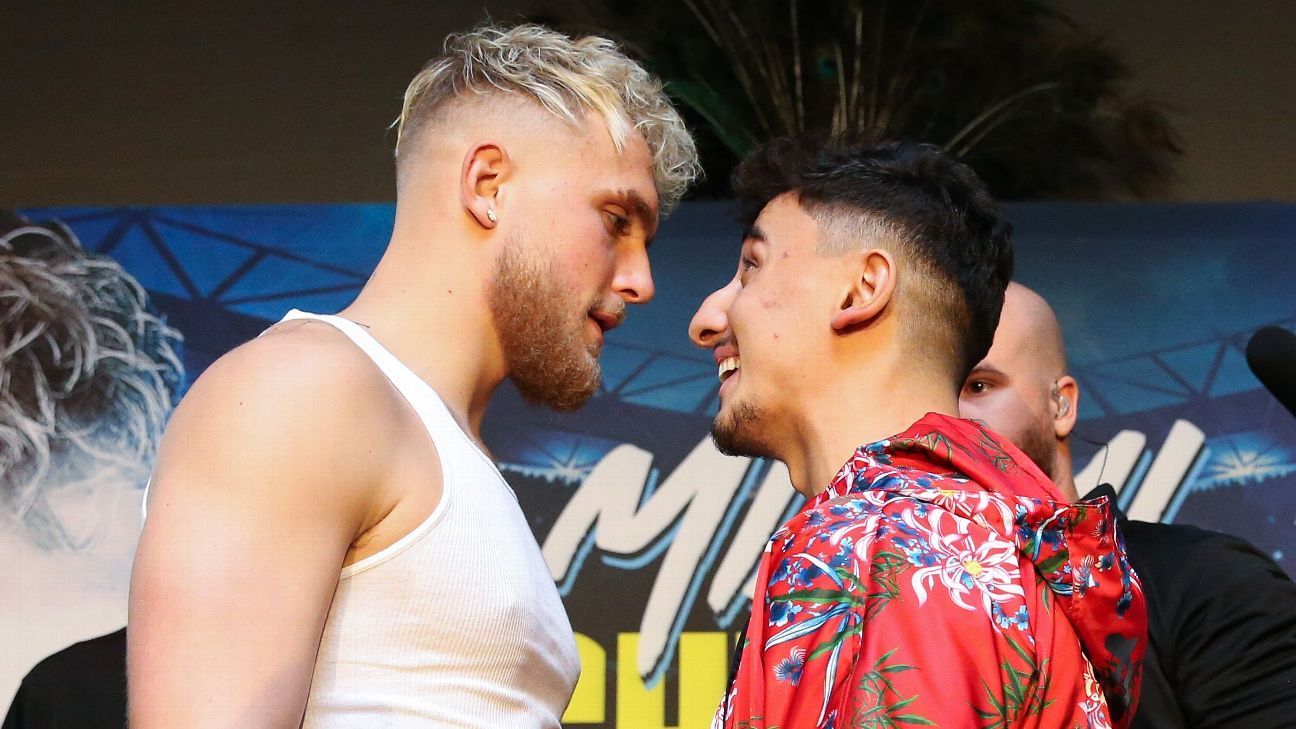 There’s a little bit of something for everyone on this show, and here are some of the key storylines to look out for:

If you were cynical, you’d say that Demetrius Andrade’s defense of his WBO middleweight title against Luke Keeler shouldn’t be the main event, when you consider the other fights on the card.

“As long as I am building my legacy, performing the way I need to perform and people are loving my style and things I am doing, I am not worried about anything else as the fans are going to start demanding that these guys fight me,” Andrade said.

But you have to wonder whether that’s true. Whether it’s fair or not, HOW you win in this sport is sometimes just as important as the actual result. Andrade, an athletic and long southpaw, has the skills to win fights, but not necessarily the style required to entertain the masses. It’s one of the reasons why the other blue-chip fighters in this weight class have been reluctant to face him.

Andrade, who just signed a four-fight extension with his promoter, Matchroom Sports, would be doing himself a favor by not just defeating Keeler, but really making a statement by finishing him off early.

A chance to see Roman in action

Despite being a unified world titleholder, Danny Roman is still vastly overlooked and underrated. In fact, despite having two titles, ESPN ranks Roman fourth in the junior featherweight division behind Guillermo Rigondeaux, Emanuel Navarrete and Rey Vargas.

“I mean, I’m a unified champion [in the] division. You could give me a little more credit,” Roman says with a laugh.

Roman (27-2-1, 10 KOs), who faces the highly regarded but inexperienced Murodjon Akhmadaliev (7-0, 6 KOs), is as amiable and unassuming a boxer as you’ll meet, which is perhaps one of the reasons why he doesn’t always garner a lot of headlines.

This bout was originally scheduled for September, but Roman had to pull out because of a left rotator cuff injury. Akhmadaliev’s camp insinuated that Roman was feigning injury to get out of his obligation to face them, which certainly peeved Roman’s manager/trainer, Eddie Gonzalez.

“It becomes personal because all the speculation from the other side, from Murodjon’s camp. I can’t believe they’re not professional enough, or had common sense to know when you should go through with a fight or not,” said Gonzalez recently. “[On Saturday] I think they’ll find out who Danny Roman is.”

Akhmadaliev has only seven professional contests under his belt, but he’s counting on his vast amateur background to get a victory.

“To be honest, I think that we’re pretty even in experience,” Akhmadaliev said. “I beat a hundred guys like Roman in the amateurs. I know it’s a different thing, but I was in the amateurs for 15 years and I beat all the top guys in the world.”

One last thing: Akhmadaliev — the WBA mandatory challenger — is actually the slight betting favorite coming in.

Joel Diaz will be a busy man

Trainer Joel Diaz, who works with his stable of fighters at the Boys and Girls Club in Indio, California, will be in the corner for two title fights Thursday. Diaz is the head trainer for both Akhmadaliev and Joseph Diaz (no relation), who challenges IBF junior lightweight world titlist Tevin Farmer.

An for Joseph Diaz, the respected trainer believes that putting pressure on his opponent will be Diaz’s key to busting Farmer’s pipes.

“I know for a fact that Tevin Farmer needs to be 100 percent in top shape because ‘Jojo’ Diaz is going to be in his face all night,” Joel Diaz says.

Since winning the vacant IBF junior lightweight belt against Billy Dib in 2018, Farmer has made successful defenses versus James Tennyson, Francisco Fonseca, Jono Carroll (which was actually a pretty good scrap) and Guillaume Frenois.

But in Diaz, he might have his most talented and dangerous dance partner. A fellow southpaw, Diaz isn’t a great puncher but a guy who’s a well-schooled craftsman who doesn’t waste a lot of movement inside the ring.

This figures to be a very entertaining, hard-fought scrap since neither has real power, but both possess quick hands and sharp skills. Expect a fast-paced chess match, with both Farmer and Diaz having to make adjustments on the fly as they battle for tactical control of this fight.

Yes, Farmer has a belt, but he’s still in a fight for recognition, and this card in Miami, which might have various luminaries from the world of sports peeking in, will be a valuable opportunity for him to further his brand and create a buzz about himself for the rest of this upcoming year, for which he has clear goals: “To become a unified world champion, or undisputed champion.”

But Farmer is also a realist.

“I think it’s very hard for those goals to get done because nobody wants to fight nobody, the best don’t want to fight the best, the promoters don’t want to put their fighters in with other top guys,” Farmer said.

Currently, the other belt-holders at 130 are Jamel Herring (WBO), Miguel Berchelt (WBO) and Leo Santa Cruz (WBA). Herring and Berchelt are promoted by Top Rank, while Santa Cruz is associated with Premier Boxing Champions, companies that rarely work together.

Farmer is also one of the sport’s signature stories of perseverance. He started his career with a record of 4-3-1 but has gone 26-1 with one no contest since.

Farmer has also overcome his fair share of obstacles. A few years ago, as a violent altercation broke out at a niece’s birthday party, Farmer was shot in the hand. Fortunately, the injuries sustained were not career threatening.

Joseph Diaz was a member of the 2012 Olympic team that was shut out of a gold medal in London. But as professionals, other members of that squad have done very well. Errol Spence Jr., Rau’shee Warren, Herring and Jose Ramirez have all won major world titles in their careers.

Diaz, a southpaw from South El Monte, California, is still waiting to capture his first belt. Diaz lost a decision to WBC featherweight titleholder Gary Russell Jr. in 2018, and then three months later he failed to make the 126-pound limit for a fight against Jesus Rojas, making him ineligible to win a version of the WBA title.

“I don’t think about it that much, I’m happy for my teammates, that they all accomplished being a world champion,” Diaz said. “It’s just that my journey has been different, everybody’s journey is different and my time is now with Tevin Farmer.”

He fought respectably against the talented Russell, losing a unanimous decision. Diaz had some moments, but not enough of them. So what did he learn from that loss that can help him against Farmer?

“Taking more chances,” Diaz explained. “Be more risky in there, just trust in my abilities.”

The goal in Miami is to be as aggressive and active as he can against Farmer. In preparation for this bout, Diaz sparred with Tramaine Williams, a slick, undefeated fighter who has an abundance of speed and quickness.

And Diaz has extra motivation: He doesn’t like Farmer much.

“I think he’s a little too cocky, a little arrogant,” Diaz said. “I don’t like the way he disrespects people, even with other fighters he’s fought. He’s been very disrespectful. We’re going to settle things in that ring on Thursday night.”

A YouTuber and a hall of famer

When Jake Paul faces fellow YouTube personality AnEsonGib in the co-feature (seriously, that is the co-feature), you’ll also see former three-weight-class world titlist Shane Mosley in Paul’s corner. Mosley, who will be inducted into the International Boxing Hall of Fame in June, has been dabbling as a trainer.

Mosley worked with Paul in the mountains of Big Bear Lake, California, and even had Paul spar with undefeated junior middleweight prospect Serhii Bohachuk.

“[Bohachuk] hit Jake to the body a couple of times really hard, hit him to the head,” recalls Mosley. “Jake took it and tried to fire back. [Paul] kept getting hit and he fired back, didn’t quit.”

Paul has impressed Mosley with his commitment and work ethic, prompting Mosley to say that Paul has “a fighter’s mentality.”

While there are many hard-core fans and old-school types who blanch at such novelty acts in the fight game, Mosley has no such reservations.