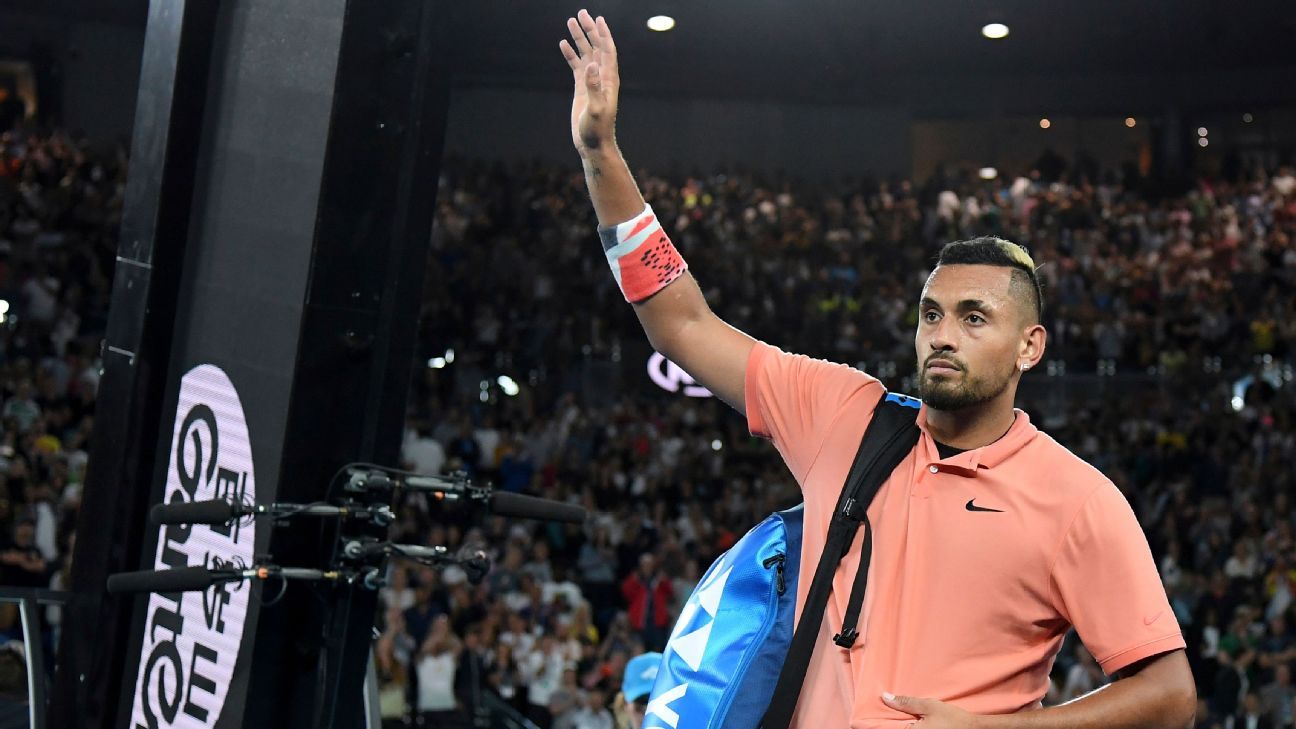 MELBOURNE, Australia — If respect has to be earned, then Nick Kyrgios has earned it.

From Rafael Nadal, whom he pushed almost to the limit in a brilliant fourth-round battle at the Australian Open on Monday; from the Australian public, whom he thrilled and took on a crazy journey from start to finish; and from his peers, who have seen the Australian mature in the space of just over a week in a way many must not have thought he was capable of doing.

The handshake at the end of the 6-3, 3-6, 7-6 (6), 7-6 (4) loss, and Kyrgios’s tap of Nadal’s chest, said a lot given the animosity the pair had shared in previous meetings. So did his words: “Good luck” to Nadal as the Spaniard marches on in search of a record-equaling 20th Grand Slam title.

This has been the best of Nick Kyrgios, always a supremely talented athlete, but this time, one playing with a purpose and giving it everything. The bushfires that have caused devastation and tragic scenes across the country hit him hard, but they also proved to be an inspiration. So did the shocking news of the death on Sunday of NBA legend Kobe Bryant in a helicopter crash.

“I feel like I’ve made progress as a human,” said Kyrgios, who wore a Bryant shirt in the pre-match warmup and in the press conference after. “(As a) tennis player, I don’t really care about as much. But I mean, I feel good. Obviously today was horrendous, like the news (about Bryant), but I want to keep going in this direction for sure.

“I always had pretty good perspective, (but) if anything, it did fuel me and made me play harder. They (the fires) are still going, everything is still going. The last month for me has been pretty hectic, been pretty emotional. I’m pretty tired. I want to try to continue to help where I can.”

It should be remembered that Kyrgios is still on probation on the ATP Tour until March 30 after he received a suspended 16-week ban in September after he was found guilty of “aggravated behaviour” during a tournament in Cincinnati the previous month.

He has kept his head down since and came through the recent ATP Cup without incident. Though the ATP suspended ban does not affect the Grand Slams, which are run by the ITF, his conduct in Melbourne has been far better than usual to the point where Nadal, who has been one of the most critical of him in the past, offered a warm endorsement of Kyrgios 2020.

“When he wants to play tennis, when he’s focused on what he’s doing, I think he’s a very important player for our sport because he has a big talent,” Nadal said. “He’s one of these players that can be very, very interesting for the crowd.

“I am never against his way or style to play. When I criticized him in the past is because I think he did a couple of things that are not right and are not the right image for our sport and for the kids. But when he’s doing the right things, I am the first one who supports this.

“I saw him playing during the whole tournament almost every match, and he has been great, with very positive attitude. I like to watch him play when he’s doing that way. I think everybody likes to watch Nick plays when he’s able to play like this. His talent is to be one of the best of the world, without a doubt, with good chances to fight for every tournament.”

Kyrgios appreciated Nadal’s words but said it was something he already knew about himself.

“I’ve known that for the last four years,” he said. “But the trouble for me is being able to actually just produce the same attitude over and over again. Hopefully I can keep doing it. I’m just taking it day by day, trying to be positive, just bring positive vibes.”

It is as open as Kyrgios has been about his attitude, which can only be a good thing. His contribution to the effort to raise money for bushfire relief has been inspirational. Not only did his efforts encourage the tennis world to come together for the relief cause, he will also be donating $20,000 from his serving exploits, having served 100 aces and pledged $200 for each one.

Kyrgios has always divided opinion. He admits he has stepped over the line on many occasions but in the past week-and-a-half, he has shown a new maturity. At 24, he seems to be learning to harness what makes him tick and how to channel it for good. If he can continue that, as Nadal said, he will be a big threat for every tournament he plays. The match itself was nothing short of spectacular, with drop shots, angles, tweeners, an underarm serve, aces and fist pumps galore from both men. Nadal showed his champion quality to edge his way through, but it was the fact that Kyrgios stayed with Nadal mentally that was perhaps more impressive than anything.

Playing for a bigger purpose was the trigger he needed. Now he just needs to find it from within, too. Back in the top 20 after reaching the last 16, he will be seeded at every event. If he can hold his mind and body together, he will be thrilling crowds just as much as he did in the Rod Laver Arena on Monday.

As John McEnroe said on Eurosport: “If Nick plays anything like he did tonight then he can be in the top 10 by the end of the year. I loved watching Nick play tonight, let’s hope and pray it continues.”

It is a tantalizing prospect.

Wyshynski: Celebrating Ryan Hartman and other NHL ‘glue guys’
Roundtable: Which teams have the best, worst schedules during the fantasy basketball playoffs?
Rahm shoots 7-under, tied for lead at AmEx
LeBron x Liverpool: James reveals jersey in collab with Premier League giants
Bengals or Chiefs? 49ers or Eagles? We’re on to the AFC and NFC title games with early previews