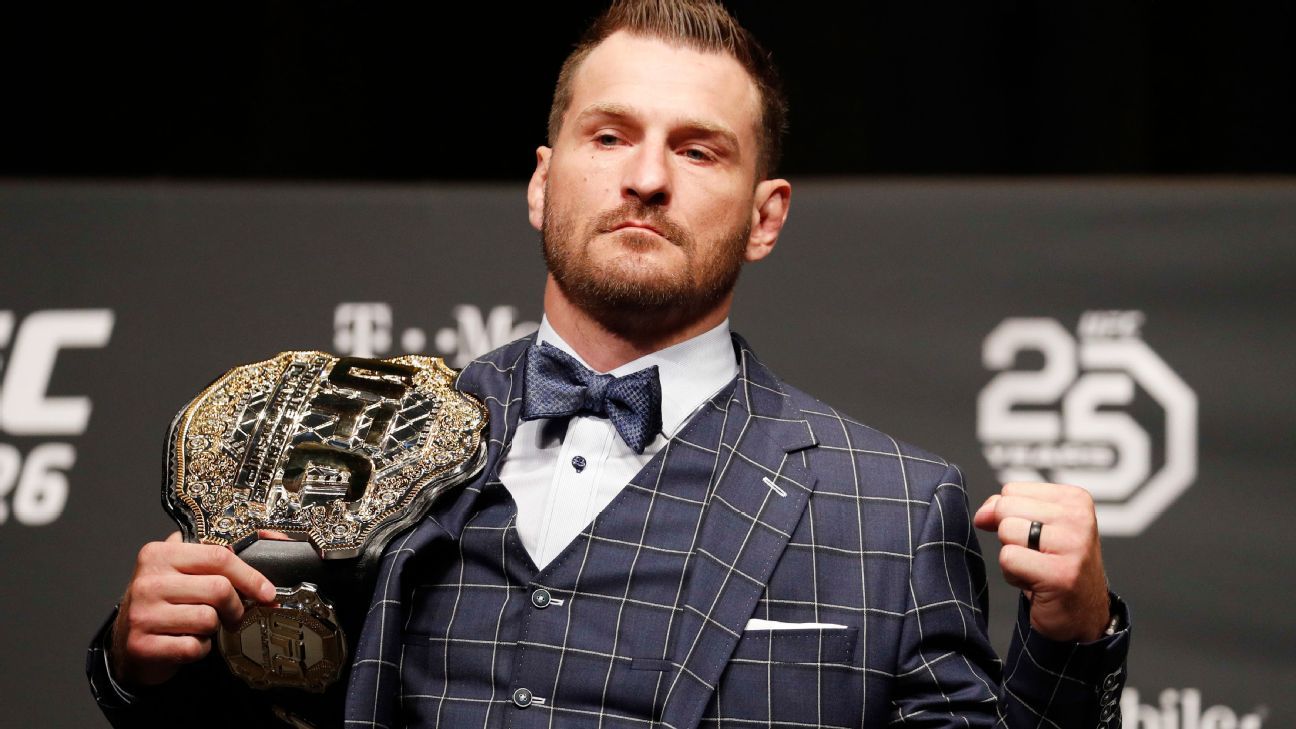 UFC heavyweight champion Stipe Miocic is recovering from eye surgery, and his manager isn’t sure when he’ll be able to fight again.

Top contender Daniel Cormier is tired of waiting and said if his trilogy fight with Miocic doesn’t happen by this summer, he could just retire.

ESPN’s No. 4 prospect Curtis Blaydes is coming off an impressive win Saturday and said if Miocic isn’t defending by the summer he’ll call for him to defend or vacate.

The UFC’s heavyweight division is a bit dysfunctional at the moment, which is why ESPN’s panel of Brett Okamoto, Marc Raimondi and Jeff Wagenheim is weighing in with insight on the current situation and one bold prediction.

How long should the UFC wait for Miocic before making a move with the heavyweight division?

Okamoto: I hate to say this, because I’m a big proponent of keeping a division moving, but I think the UFC could wait out the entire year if need be. The uncertainty around Miocic’s eye injury warrants that. You can’t rush back from this, and you can’t be upset there’s no firm time frame for his return. That’s just the nature of the injury. Cormier is getting impatient, but at the end of the day, it’s not like there’s another fight out there for him. He’s got one left, and he wants it to be against Miocic. That means he’s on Miocic’s schedule, simple as that. Miocic isn’t trying to get out of this fight — he can’t compete right now.

Now, the UFC likes to book its schedule in advance, when possible. So, if the promotion is getting into the territory of booking October, November, December — and Miocic still has no idea when he’ll return — then I feel it would be appropriate to make a move. But that means we might not see a legitimate heavyweight tile fight until the very end of 2020, but given the circumstances, I’m OK with that.

Raimondi: If Miocic isn’t ready by August, it might be time to shake things up. No disrespect to the heavyweight champ. He should take as much time as he needs to heal his eye. With that said, August will be one year since Miocic fought, the TKO of Cormier at UFC 241. Interim belts are never ideal, but when used judiciously because of an injured champion they are passable. That might be the direction things are going here.

Miocic’s agent Jim Walter told me last week that the hope is Miocic will be back in 2020, but they still might not know for a few months if he’ll need a second eye surgery. The uncertainty of the situation could force the UFC to make a hard choice.

Wagenheim: I don’t want to make this all about Miocic. Every champion should be obligated to defend a title at least once within a 12-month period. If that doesn’t happen, for whatever reason, the belt needs to move on. And there’s no need to hocus-pocus any faux interim straps. Just strip the champ, let the Nos. 2 and 3 fighters in the division tug-of-war for the real belt, and put the old champion at the head of the line for a shot to regain the title upon his or her return.

So in the case of Miocic, who regained the heavyweight belt last Aug. 17, he should be required to defend by Aug. 17, 2020, or vacate. But this is not just a heavyweight problem. In the time since Miocic knocked out Cormier last summer, five of the UFC’s other 11 belts have not been defended. Henry Cejudo won his flyweight title in August 2018, and it wasn’t until last month that he announced his intention to vacate. Amanda Nunes added her featherweight strap in December 2018 and has yet to put it on the line.

If Miocic vs. Cormier 3 doesn’t come together, what should the UFC do with the heavyweight title?

Okamoto: That decision starts with Cormier, right? Because if Miocic vs. Cormier 3 doesn’t happen, it’s presumably because Miocic is still unable to compete. So, does Cormier want to fight for an interim belt? Or would he rather retire? If Cormier wants to fight, the obvious two matchups would be Ngannou and light heavyweight champion Jon Jones. Personally, if this is to be the final fight of Cormier’s career, I would want to see him do it against Jones, or just leave the sport entirely. I can understand him coming back to beat a man who’s beaten him — as Jones and Miocic have done — but not for a completely new fight.

If Cormier were to ride off into the sunset, then man, Jones vs. Ngannou for an interim title is a dream fight. Blaydes deserves to have his name mentioned here, but the reality is, he’s odd man out in all of these scenarios.

Raimondi: If Miocic isn’t the opponent or if he’s not ready by summer, then Cormier will likely retire, he said Monday on Ariel Helwani’s MMA Show. That could force the UFC to make an interim belt while Miocic is recovering from his eye injury. The winner of Ngannou vs. Rozenstruik seems a lock to be in that fight, especially if it’s Ngannou. So does Blaydes. The only problem is Ngannou has already finished Blaydes twice. The other fighters in the mix would be Derrick Lewis and Alexander Volkov. Lewis fights Ilir Latifi at UFC 247 on Feb. 8 in his adopted hometown of Houston.

The UFC will have to wait to see how the next two months go and then determine the next course of action. It’s probably too soon to make Ngannou vs. Rozenstruik for the interim belt, but maybe we’ll know more about Miocic in eight weeks.

Wagenheim: First of all, I don’t believe Miocic-Cormier should be a given. All positive sentiments for DC aside, Ngannou is just as deserving of being at the head of the line of heavyweight title challengers. Cormier has been a righteous presence in the sport, and it’s a feel-good narrative for him to get one last shot at glory as he heads toward the exit door. But DC made only one successful title defense before being KO’d by Miocic last summer, so his claim on a rematch is tenuous. I’m not firmly against it, but should his sweet backstory trump Ngannou’s run of three straight first-round KOs?

Having said that, if Miocic remains sidelined, the UFC should pit DC and Ngannou against each other — that is, if Ngannou gets by Rozenstruik. If Rozenstruik pulls off the upset, I’d make Cormier vs. Blaydes the title fight.

What statement did Curtis Blaydes make with his win on Saturday?

Daniel Cormier breaks down Curtis Blaydes’ performance vs. Junior Dos Santos and describes the title picture in the UFC heavyweight division. For more UFC, sign up here for ESPN+ http://plus.espn.com/ufc.

Okamoto: That his skill set is evolving and he’s going to be a monstrous threat in the heavyweight division for years to come. But as far as the immediate future, Blaydes isn’t in the title conversation. That could change if Ngannou loses to Rozenstruik, but at the moment, he just doesn’t have a chance to grab a title shot before Cormier, Ngannou or Jones. That’s unfortunate for Blaydes, but it’s not necessarily unfair. He’s had two chances against Ngannou, and lost both. So, for now, he’s stuck where he’s at.

Again, that said, Blaydes’ knockout of Junior dos Santos is 100 percent worth taking notice of. At 28, Blaydes is entering his prime years. He’s got some very, very big fights ahead of him — they’re just not quite on deck at the moment.

Raimondi: Blaydes is unequivocally the real deal. I’d go as far as to say he’s a future heavyweight champion. At 28, time is definitely on his side. Most of his peers are much older. Cormier is 40 and Miocic is 37. Blaydes, along with Ngannou and Rozenstruik, is the future of the division. Maybe he’ll end up being the present, too, depending on how these next few months shake out.

But there was no doubt he impressed against dos Santos. It wasn’t just that he finished the former heavyweight champ, it was how he did it. He outboxed the boxer, using the threat of his wrestling to force openings, which led to that big overhand right that all but finished it. Blaydes’ skills have really sharpened of late.

Wagenheim: Blaydes, whose 45 takedowns are the most in UFC heavyweight history, had zero — on six attempts — against dos Santos. That’s not bad news. Facing one of the division’s most feared strikers, Blaydes got the better of the standup scrap, beating JDS to the punch to score a second-round knockout. That’s an emphatic statement.

But while there are worse things than showing that you’re evolving beyond just wrestling and have become a well-rounded fighter, Blaydes needs to remember where his bread is buttered. He cannot afford to fall so deeply in love with his flashy fists that he abandons the takedown-first approach that got him where he is. If he takes his newly developed Plan B and tries to move it up to Plan A, Blaydes could end up going zzzzz.

Okamoto: Oh man. I could literally make a case — a strong case — for each of the top four candidates — Miocic, Cormier, Jones, Ngannou. I’m gonna go with Miocic. I think he fights once in 2020, and I think he gets the job done. Cormier represents a lot of problems and could definitely win a trilogy bout, but he’s now 40 years old, and the time off won’t help him. Ultimately, I guess what I’m saying here is I do think Miocic vs. Cormier III happens, and that I lean ever so slightly toward Miocic winning. So, give me Miocic.

Raimondi: Ngannou. With Miocic’s future tied with Cormier — Cormier won’t fight again if it’s not Miocic — that leaves the likes of Ngannou, Blaydes, Rozenstruik, Lewis, Volkov and others. Ngannou has beaten Blaydes twice already, and when he’s right his power makes him the most dangerous man in the division. This could be the year Ngannou breaks through and becomes champion.

Wagenheim: I’ll go with the powerful Ngannou, but only because January seems awfully soon for Conor McGregor’s gung-ho rise through the weight classes to reach and take over the big-boy division.