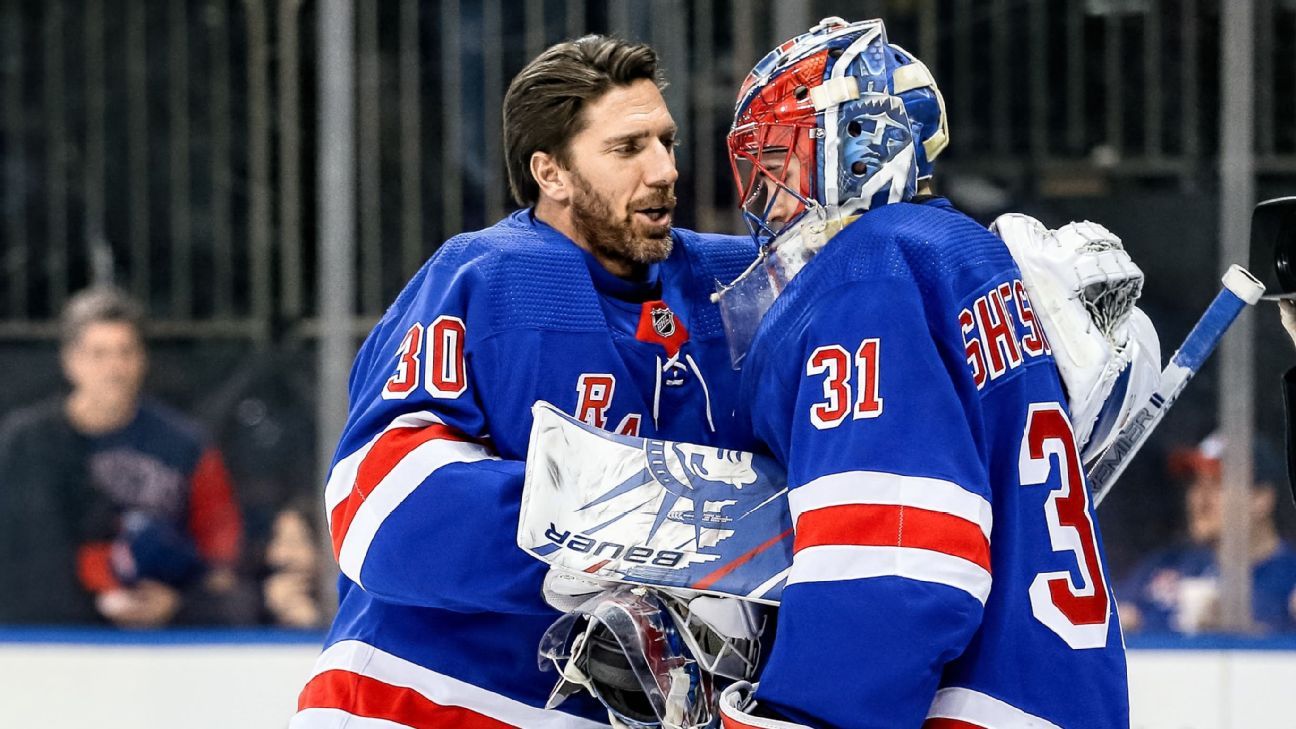 The New York Rangers might not quite be in the Stanley Cup playoff picture, but they appear to have themselves a goalie controversy. Henrik Lundqvist‘s gradual decline combined with the emergence of young backup Alexandar Georgiev and the call-up of talented prospect Igor Shesterkin has left them with some decisions to make in the coming weeks.

The Rangers have attempted to get each of the three goaltenders their share of time in the crease, but for the first time since the mid-2000s, Lundqvist is shedding starts. One of the best, if not the best, NHL goalies of the past 15 years, Lundqvist has been reduced to two starts in the team’s past 11 games. So what now?

Our NHL team — Emily Kaplan, Greg Wyshynski and Chris Peters — answers the biggest questions about what lies ahead in New York’s crease.

Wait, the Rangers really have a goalie conundrum with Lundqvist still in the picture?

Emily Kaplan, national NHL reporter: Lundqvist has been the Rangers’ starting goaltender for the past 15 years. But with the 37-year-old looking at the back end of his career, the Rangers are looking for a succession plan. Over the past two years, the Blueshirts have been giving a larger workload to Lundqvist’s backup, the 23-year-old Georgiev. It was a fine — and normal — arrangement. But on Jan. 6, the team surprised everyone by also calling up its top goaltending prospect, Shesterkin, 24, who has long been tabbed as Lundqvist’s heir apparent. And now the Rangers are in a pickle.

OK, but is Lundqvist still the No. 1?

Greg Wyshynski, senior NHL writer: The numbers tell us he isn’t. With 34 games left in the season, Lundqvist has started 23 games. At this current pace, he could end up with fewer than 40 starts for the first time in his career. Since Dec. 2, Lundqvist has started eight games. Georgiev has started 11 games, and Shesterkin has started three of them. If we’re being generous, maybe this could be read as Lundqvist being a co-starter with the younger goalies. But it’s clear that Hank isn’t eclipsing the output of his crease-mates like in previous seasons.

Who has been the most impressive goalie in New York this season?

Wyshynski: Georgiev has been the Rangers’ best goaltender, but the margin is rather thin. He has a goals saved above average per 60 minutes of 0.296, just ahead of Lundqvist (0.283). They’re basically tied in wins above average. Georgiev’s even-strength save percentage is .910 to Lundqvist’s .907, neither of them being all that good. Where Georgiev is slightly stronger is in quality start percentage at 59.1 to Lundqvist’s 52.2 — which would be the lowest such figure of The King’s career. (Stats via Hockey Reference and Evolving Hockey.)

Is there a benefit to using three goaltenders?

Wyshynski: Hey, the more the merrier, as they say. We can get into all sorts of discussions about load management with a three-headed monster in goal. But the immediate benefits are the hope that one of these goalies can catch fire for a couple of weeks, either to get the Rangers back in the playoff hunt or as an audition for other teams ahead of the trade deadline. But when it comes to Shesterkin, it’s probably best to have him around and get him acclimated to NHL life as the goalie of tomorrow. (He was sent down to the AHL ahead of the NHL All-Star Game to get him more playing time during the break, but he is likely to be right back up with the big league club soon.)

Who is the most likely to be dealt somewhere else?

Kaplan: Georgiev. Shesterkin isn’t going anywhere. And while the Rangers might like to trade Lundqvist and go with the two younger guys, that’d be pretty tricky (more on that later). But Georgiev is on his entry-level deal (making only $792,500 against the cap) and is under team control (he’s a restricted free agent this summer). Plus, his trade value has never been higher. The Rangers are likely looking for a first-round pick in return.

Is there a trade partner for Georgiev?

Kaplan: The Toronto Maple Leafs reportedly have interest, and that would make a lot of sense considering their well-documented search for a competent No. 2 behind Frederik Andersen. The San Jose Sharks could be a dark horse contender, too, considering how awful their goaltending has been.

Could Lundqvist suddenly decide to waive his no-movement clause?

Kaplan: He could, but so far in his career, he has shown absolutely no desire to. Lundqvist is a player who likes living in New York, likes playing in New York and would love to end his career playing only in New York. He has already toughed it out for the worst parts of the rebuild and would like to see it through.

OK, but even if he did, is there a team that makes sense for Lundqvist?

Wyshynski: Assuming that Lundqvist wants to win a Stanley Cup wherever he’d theoretically go, it’s worth nothing that many of this season’s contenders already have two solid goaltenders. The Tampa Bay Lightning or Vegas Golden Knights might love Hank as a backup insurance policy to Andrei Vasilevskiy and Marc-Andre Fleury, respectively — and a guy with a great Game 7 track record, to boot — but they could barely make the finances work now, let alone next season. Lundqvist probably isn’t keen on moving to Alberta, but the Edmonton Oilers would be an intriguing fit.

And if it isn’t about the Cup but more about staying local with the chance to play? How about going through the Lincoln Tunnel and splitting time with Mackenzie Blackwood for the next season and change with the New Jersey Devils?

Catch 300+ NHL games streaming live or on replay this season on ESPN+. Click here for the upcoming schedule and to learn how to subscribe.

Could the Rangers just keep all three goalies?

Wyshynski: Could, yes — in the sense that they might have to do so. As Emily noted, Lundqvist has control over trade destinations and his no-move clause doesn’t give the Rangers any room to strong-arm him with demotions to the AHL or some such, although we doubt they’d have the appetite to do that anyway. The price tag on Georgiev remains high, and the Rangers might see him as a more important part of their future than as a trade option. Again, look at the contenders this season and see how many have two viable options in goal.

Regardless, Shesterkin appears to be the guy of the future, right?

Chris Peters, hockey prospects analyst: About a month before Shesterkin was called up, one Eastern Conference goalie scout told me he thought the young Russian was the best goalie in New York’s system at that moment — and that included Lundqvist. It seemed bold but believable at the same time. I had him as the No. 58 overall prospect coming into the season, second among all goalies behind only Florida’s Spencer Knight (No. 51) and ahead of Washington’s Ilya Samsonov (No. 67). I always hedge way more on goaltenders in overall rankings, especially those from overseas, but if they end up in my preseason top 100, it’s because I think they have No. 1 potential.

What makes Shesterkin so good?

Peters: In my view, he has showcased No. 1 upside in each of his post-draft seasons, shining brightly for club and country for each of the past five seasons while posting great numbers. Shesterkin is a little below average when it comes to size but not dramatically so. Beyond that, there aren’t a whole lot of weaknesses. He has that good mix of technique and speed, he keeps things under control and he will do anything to make a save. There is not a lot of wasted movements with him, and he just flat out competes.

After seeing him manage the transition to North America’s smaller rinks, the AHL’s pace and a weaker defense in front of him, any skepticism I had was swept away. Throw in his early NHL starts, and there is simply no stage too big for this young goalie. Most signs point to him being a very capable heir to Lundqvist sooner than later.

So how does this three-man battle for ice time resolve itself?

Kaplan: The Rangers will find a suitable trade partner for Georgiev by the draft in June — maybe they don’t get a first-round pick, but they’ll get a decent return — and Lundqvist and Shesterkin carry on next season as the tandem.

Wyshynski: Agreed, although I do think there’s a chance Georgiev gets moved at the trade deadline this season. The problem for GM Jeff Gorton is getting the price he’s seeking. Look at the most recent understudy traded at the draft: Philipp Grubauer went for a second-round pick in 2018, although that value was affected by Brooks Orpik‘s contract being sent along with him to Colorado. And he was three years older and more established than Georgiev.

Kaplan: Shesterkin plays the most games the rest of the way, and he and Lundqvist will split starts next season.

Wyshynski: I still think Lundqvist ends up getting the most starts for the next three months — but by a slim margin. But Shesterkin leads the team next season.

Peters: As long as Georgiev is there and healthy, he should be getting the bulk of the starts with Shesterkin playing regularly in the AHL. Then 2020-21 is a platoon season for Shesterkin and Lundqvist, with the younger goalie getting no less than half the starts.

NFL buzz from the Senior Bowl: What we heard on top draft prospects, trade talks, 2023 QB class
Kiley McDaniel’s top 100 MLB prospects for 2023: Which future star is No. 1?
Kiley McDaniel ranks all 30 MLB farm systems for 2023
Eagles emerge as small SB favorites over Chiefs
Hurts reflects on journey after lifting Eagles to SB