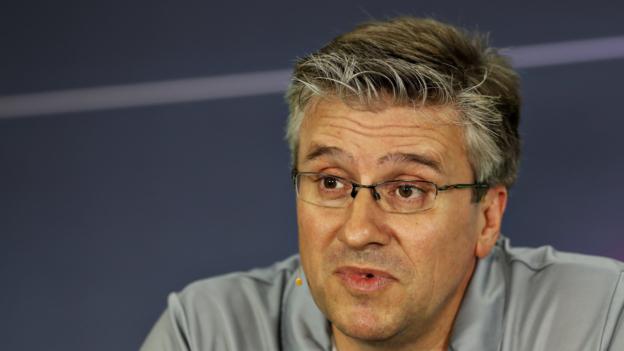 Pat Fry is to start work at Renault as their new chassis technical director on 5 February.

The announcement of his start date and official title follows the team’s confirmation last November the 55-year-old engineer was joining them.

Fry, who has been on gardening leave from McLaren since last July, is a direct replacement for Renault’s ousted former technical director Nick Chester.

Chester left after a disappointing 2019 season for the French team.

Renault started last season aiming to build on their fourth place in 2018 and move closer to the top three teams, but instead fell to fifth in the constructors’ championship behind their engine customer McLaren.

Fry, who will attend the launch of Renault’s 2020 F1 car in Paris on 12 February, brings a wealth of experience. Most recently, he played a significant role in McLaren’s revival last season after joining them in the summer of 2018.

Fry has spent most of his career at McLaren, joining them in 1993 and rising to a role leading car design under technical director Paddy Lowe until he left the team in 2010 to join Ferrari.

He went to Ferrari as assistant technical director at the start of 2011, rising to director of chassis in May that year after the sacking of technical director Aldo Costa, who subsequently moved to Mercedes and became a leading figure in their domination of the last six years of F1.

Fry then in turn left Ferrari at the end of 2014, their first winless season since 1993.

He spent some time as a consultant for the now defunct Manor team in 2016-17 before returning to his most recent role at McLaren.

Joining Renault marks a return to his roots for Fry, who started his F1 career with what was then called the Benetton team in 1987 and stayed there until 1993, when he joined McLaren.

Fry will team up again with Renault sporting director Alan Permane, who worked with Fry during his first period at the team based in Enstone, Oxfordshire, and who has stayed there through its various guises since.

What started as Toleman in the early 1980s has since been known Benetton, Renault, Lotus and now Renault again since 2015.