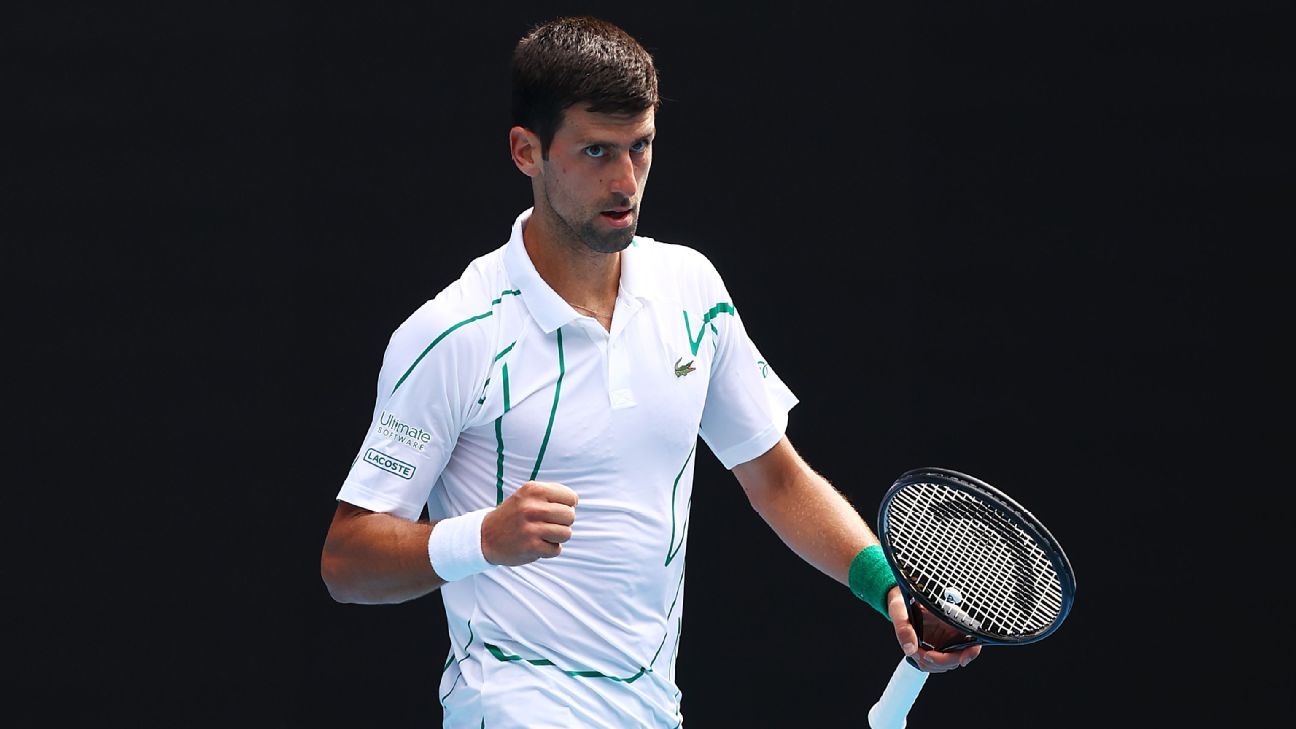 MELBOURNE, Australia — When Novak Djokovic is done with tennis, they will probably erect a statue of him at Melbourne Park, the place where things began for him in 2008 and where he has enjoyed most success.

The Serb kick-started his Grand Slam career by winning title No. 1 in 2008, has won six more since and come the end of the week, it would be a surprise if he has not wrapped up Australian Open title No. 8 and Grand Slam crown No. 17.

At 32, he seems to be at the peak of his powers, with two Grand Slam titles to his name in 2019 and four straightforward wins in Melbourne propelling him into the quarterfinals of a Slam for the 46th time, a record only bettered by Roger Federer with 57.

And yet somehow, Djokovic has managed to go through the first week at his favorite Grand Slam event with no fuss and almost no hype, his Rolls Royce engine rolling smoothly while others take the headlines. The man who has won 15 of the past 36 Grand Slams is going under the radar.

“But it’s not going to last for long because he has about another week of peace and quiet before everybody starts bombarding him with the next question, which is, ‘How on earth are you not going to be considered the greatest player in the history of the game on paper after you won this tournament again easily? How many more of these can you win? You won Wimbledon …’

“I think he’d better enjoy it.”

The Australian Open began amid concerns over the bushfires that savaged Australia over the previous month, taking the focus away from players chasing titles and placing it on things of far more importance.

And when the tournament began, the performance of Ashleigh Barty — Australia’s big hope for a first home champion since 1978 — epic battles involving Nick Kyrgios and Federer, shocking defeats for Serena Williams and Naomi Osaka and the retirement of Caroline Wozniacki took the spotlight away from Djokovic, who just went about his business.

It was last summer that Djokovic added Goran Ivanisevic to his team, and the former Wimbledon champion had an immediate impact as the Serb won his fifth Wimbledon title by saving two match points in the final against Federer.

One of Ivanisevic’s first moves was to end Djokovic’s association with Craig O’Shannessy, the stats specialist who had spent the previous three years in Djokovic’s camp. It was a partnership that yielded four Grand Slam titles.

As he was as a player, Ivanisevic is a coach who prefers instinct to numbers. Fearing stats might overload Djokovic, Ivanisevic persuaded him that it was time to end the relationship and trust in his ability.

It has not adversely affected the way Djokovic is playing in Melbourne. After dropping a set to Jan-Lennard Struff in Round 1, he crushed Tatsuma Ito, Yoshihito Nishioka and Argentina’s Diego Schwartzman, serving brilliantly and returning almost to perfection.

In last year’s final, Djokovic beat Rafael Nadal in straight sets, a domination that few people expected after the Spaniard had reached the title decider without dropping a set. Wilander said he could not see anyone stopping Djokovic again.

“I see him winning it. I think that everything natural about this tournament is heading in his direction,” Wilander said. “I think the finals last year doesn’t really matter, but I think on the day of [the final, if it’s Nadal], maybe there will be a little scar tissue there. Novak’s had a perfect preparation.”

Novak Djokovic speaks about facing Milos Raonic in the quarterfinals of the Australian Open.

Djokovic has beaten his next opponent, Milos Raonic, nine times out nine, but Wayne Ferreira, the former top-10 player from South Africa, told ESPN that the Canadian could cause Djokovic some trouble on Tuesday.

“He’s won all his matches really easily,” Ferreira said. “Sometimes that’s good, sometimes it’s bad. The matches have been easy. I think if he can get stressed a little bit, maybe if Raonic pushes him and puts him on edge a little bit, we’ll start to see if he’s really as good as he’s looked so far.”