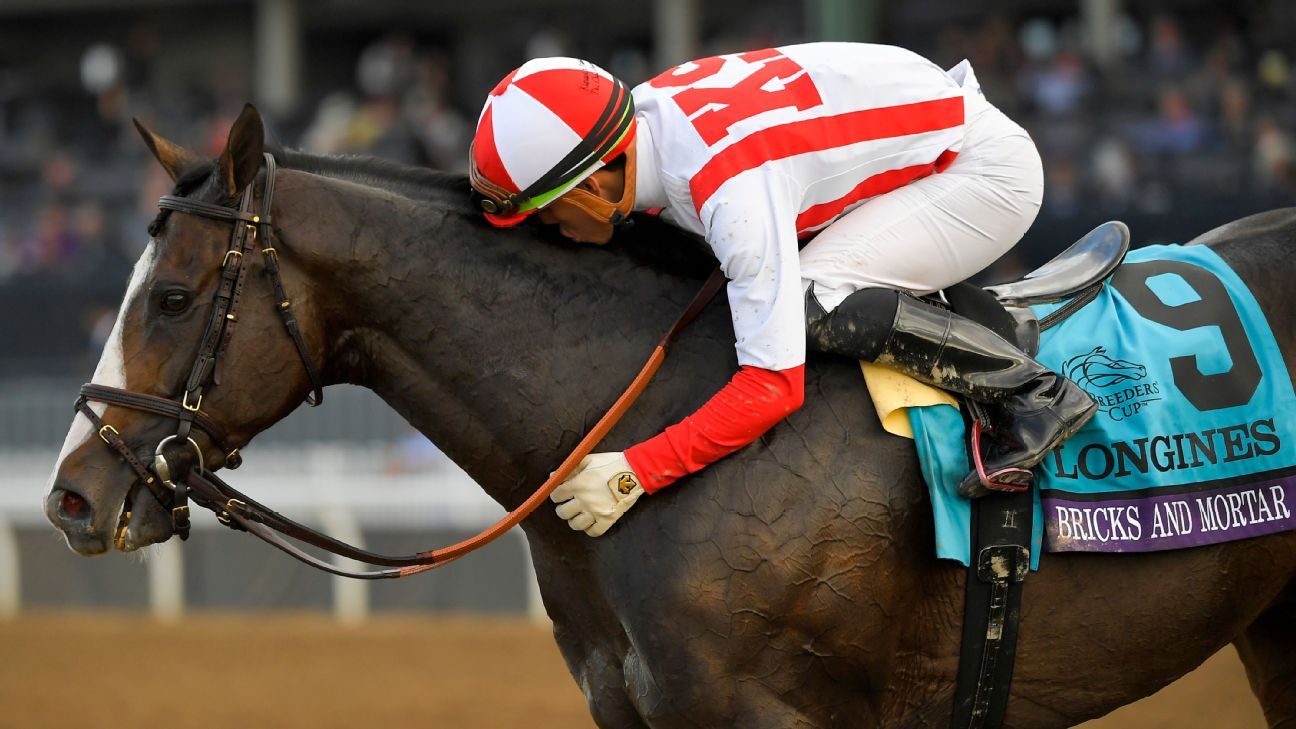 Bricks and Mortar had a perfect year, and the Eclipse Award voters gave his team a historic night.

After going 6-for-6 — all on the turf — at six tracks last year, Bricks and Mortar and his connections swept all the top honors at horse racing’s year-end awards for 2019 on Thursday night, winning horse of the year, seeing Irad Ortiz Jr. take home the jockey Eclipse, and trainer Chad Brown recognized as the sport’s best for the fourth consecutive year.

Bricks and Mortar also was the unanimous pick as the best male turf horse, which was no surprise after he won five Grade 1’s and a Grade 2 race last year — including the Pegasus World Cup turf race at Gulfstream Park, where the Eclipse Awards were handed out.

“We ran him against the best competition we could find,” said Seth Klarman, part of the ownership for Bricks and Mortar. “He danced every dance.”

The only other time a horse and its connections swept the Eclipse Awards was 1981, when John Henry was horse of the year, trainer Ron McAnally, jockey Bill Shoemaker, owners Dorothy and Sam Rubin and breeder Golden Chance Farm took the trophies.

“Thank you for this incredible honor,” Klarman said.

Bricks and Mortar didn’t race for more than a year because of a ligament problem that required complicated surgery. His road back to the track in December 2018 after a 15-month layoff wasn’t easy.

Nor were his races.

Bricks and Mortar rallied in the final strides to win the Breeders’ Cup Turf by a head over 51-1 shot United, fitting given how virtually all his races in 2019 were decided at the very end. He started the year with a 2 1/2-length win in the Pegasus World Cup Turf race at Gulfstream — and his next five races were decided by less than three lengths combined.

“Being involved with Bricks and Mortar has truly been the thrill of a lifetime for Bill and myself,” Klarman said.

Bricks and Mortar beat out Maximum Security — the would-be winner of the Kentucky Derby had he not been taken down for interfering with other horses as he entered the stretch — and Mitole for Horse of the Year.

They didn’t go home empty-handed: Maximum Security won the Eclipse as the top 3-year-old male, and Mitole was the Eclipse winner as the best male sprinter. Maximum Security’s disqualification in the Kentucky Derby was also honored as the sport’s moment of the year.

Brown won the trainer Eclipse for the fourth consecutive year, after winning a record $31.1 million in purses during 2019 — almost $4 million better than the previous mark. He joined Laz Barrera, Todd Pletcher and Bobby Frankel as the only trainers to win four consecutive Eclipse Awards.

“To operate a racing stable of this size and quality takes one of the largest efforts in all of professional sports,” said Brown, who lauded his team and said they “are the reason I’m standing here tonight.”

Ortiz — the Eclipse jockey winner for the second straight year — thanked owners, trainers and voters for the award.

“Without you guys, I wouldn’t be here today,” Ortiz said.

The Eclipse Awards are voted on by members of the National Thoroughbred Racing Association, the Daily Racing Form and National Turf Writers and Broadcasters.