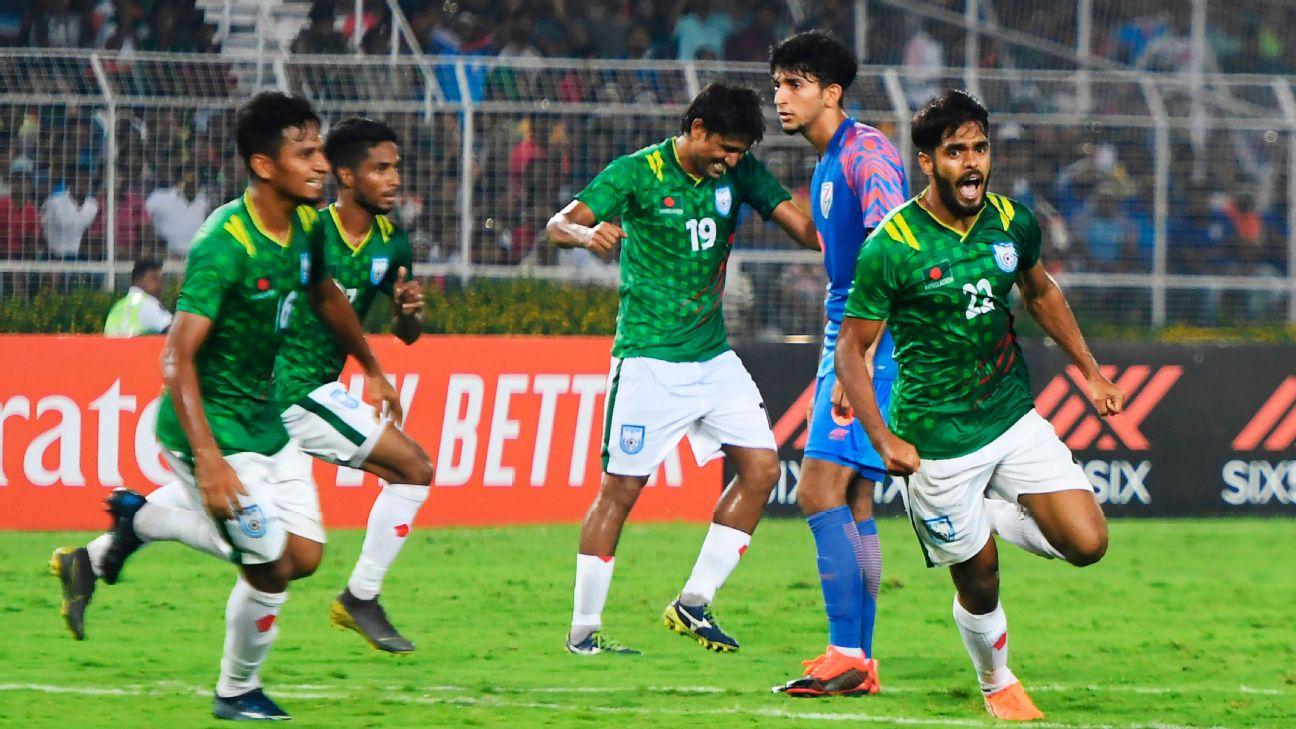 Have you ever heard the sound of sixty thousand hearts breaking simultaneously? It sounds like, well… nothing. Just a vast, sudden, emptiness where there once was a wall of noise.

On Monday, Jamal Bhuyan, captain of the Bangladesh national football team, all swagger and smirking confidence, had promised he’d break Indian hearts. On Tuesday, he did just that. It was his wicked delivery that Gurpreet Singh Sandhu flapped at, that Saad Uddin turned in to give Bangladesh the surprise lead against hosts – and favourites – India in their crucial World Cup Qualifier.

The moment the ball thumped into the back of the net, the vacuum hit. The till-then-raucous Indian fans couldn’t quite believe that a team they’d expected to swat away had taken the lead. At that moment, even the small, vociferous contingent of Bangladesh fans could not find their voice.

Salt Lake had been stunned into silence.

On a night of noisy chaos in Kolkata, it lasted but a fleeting instant, but that silence will boom loud and clear across the subcontinent. A message had been sent. Bangladesh aren’t here to muck about. Not anymore. As their head coach Jamie Day said after the match — what the Qatar draw had been to India, this was to them. “Only we are further behind India than they are against Qatar!” he said after the match. “We’ve come away from home, in front of 80,000 people and to play the way we did… phew!” he added with a smile and a low whistle, a sound that said so much more than any word could have.

That’s what makes it even sweeter. The way they played. On balance, few would have complained if they’d walked away with the win. By the end of it all, quite a few in the crowd, stoutly partisan as they were, walked out muttering that Bangladesh probably deserved to win the game. In most watching eyes, the visitors had definitely done enough. They came with a clear gameplan. And they stuck to it.

In theory, it was pretty simple.

Mark Sunil Chhetri out of the game, cut the passing channels to and around him, force India to go wide. Sit back in neat lines of 4-5-1 and spring forward with vicious speed and blunt directness. Use the pace of Mohammed Ibrahim and Saad down the flanks. Trust Jamal, Biplo Ahmed, and Sohel Rana to read the game, pack the middle of the park and remain compact. Keep faith in the one-on-one defending abilities of Rayhan Hasan and Riyadul Hasan, and the aerial abilities of Rahmat Mia and Yeasin Khan. Allow Ashraful Islam Rana to command his box. Have the tireless Nabib Ziban run the Indian defence ragged.

For 88 minutes, they made it look simple.

Jamal controlled the middle with an iron fist. Yeasin was a warrior at the heart of that defence, taking a blow to the head just a couple of minutes in and playing the rest of the match with a swath of bandage wrapped around his head, wincing every time he headed the ball, yet going harder into the next aerial duel.

Ashraful pulled off a couple of superb saves, the pick of the bunch coming when a clever Manvir Singh header seemed destined for the top corner only for the keeper to claw it out at the last moment. Ibrahim and Saad ran themselves into the ground, and when they got there, ran some more. Ziban put on a masterclass one-striker movement, pulling Adil Khan and Anas Edathodika one way then the other, forcing them into silly mistakes, creating chances by virtue of being a sheer bloody nuisance.

The goal was fortuitous, it must be said, Gurpreet having one of his Mr. Hyde days, but they created arguably the best chances of the match. Just before the goal went in, Ibrahim was played through on goal on a rip-roaring counter, the ball moving from defense to attack in five slick passes, but the young winger hesitated and turned inside to give the scrambling Adil a chance to shepherd him away from danger. Turn the other way, and he would have been through on goal.

On another day, this would have been the story of the match for Bangladesh. In their earlier games in this round of World Cup qualifying, they’d played well, created more chances than both Afghanistan and Qatar, but it just hadn’t clicked.

Jamal and Day both spoke, with more than a measure of pain in their voices, of the utter lack of confidence their strikers seemed to have in themselves. The relief and joy that swept through the collective when Saad scored their first goal of the qualifiers was palpable.

The non-finishing still reared its ugly head on occasion. Ziban missed two clear chances deep into the second half, both chances coming from precision counters. A one-on-one that was thwarted by a great reflex save from Gurpreet, and moments later a delightful chip that looped teasingly over the Indian goalie but was scissor-kicked off the line by Adil. As India threw the kitchen sink, and then the whole damn building at them, Bangladesh could well have run away with the game.

Day, though, couldn’t find the heart to find fault with his players for the momentary lapse that allowed Adil to bully India back into the game, though. Nor for any of the other missed chances that came their way. “I can’t fault them today for the way they’ve played and the way they’ve performed,” he sighed softly, sounding as exhausted as his players looked. He and his players had given their everything on that pitch and that professional pride shone through every word and every gesture.

Proud, he well might be. The result came as a shock to most, but Day had been working toward this for nearly 14 months. An Englishman who had spent a decade coaching in the lower reaches of his nation’s leagues, Day took up the job because of the challenge it posed. He knew “they had been struggling for quite a few years,” but he “wanted to try and change the position they had got themselves in.” He had started as their U-23 coach, leading them to a historic quarterfinal in the Asian Games, beating Qatar’s U-23 team 1-0 along the way.

He revamped the team, bringing in a whole host of those U-23 kids into the setup. They now consisted of 15 of the 23 in the match day squad, 5 of the 11 that started in Kolkata. He made them a tough-as-nails outfit that could run all day, and would focus on primarily maintaining shape and playing on the counter. “You have a style you always try to play at any team you coach, but you also have to adapt to the level of players you are working with,” he told ESPN ahead of the match. He means no disrespect, just that he recognizes what his team can and cannot do, and would rather they play to their strengths.

There have been plenty of frustrations along the way. A league structure that isn’t ideal, that doesn’t have academies and a focus on youth. A lack of proper infrastructure, facilities, equipment. A press pack that too often focuses on the “results and not the progression the team’s making,” on the “short term and not the long-term plan.”

He needed results to get them to see what he’d been doing, what his counterpart had already noticed when he warned the Indian journalists on Monday. “Don’t underestimate Bangladesh,” Igor Stimac had said before going on to describe the very qualities that would prove such a thorn for his side on Tuesday.

“In all honesty I am just hoping we perform well and do ourselves justice so that people can see the effort and improvement we are making,” Day admitted to ESPN before the match. Boy, did they see it.

The greatest triumph of all may well have been the sadness they felt at the end of the match. “For us to be disappointed with a 1-1 draw against India, well, that shows you just how well we performed,” said Day. Bangladesh had come to India unknown, unappreciated, underestimated. They return having changed all that.

On Monday, Jamal had also said that a win against India would change Bangladesh football, but you know what, a draw might well be enough. That one shot may just have been another volley for Saad, but for his nation, that one goal could well be a giant leap forward.