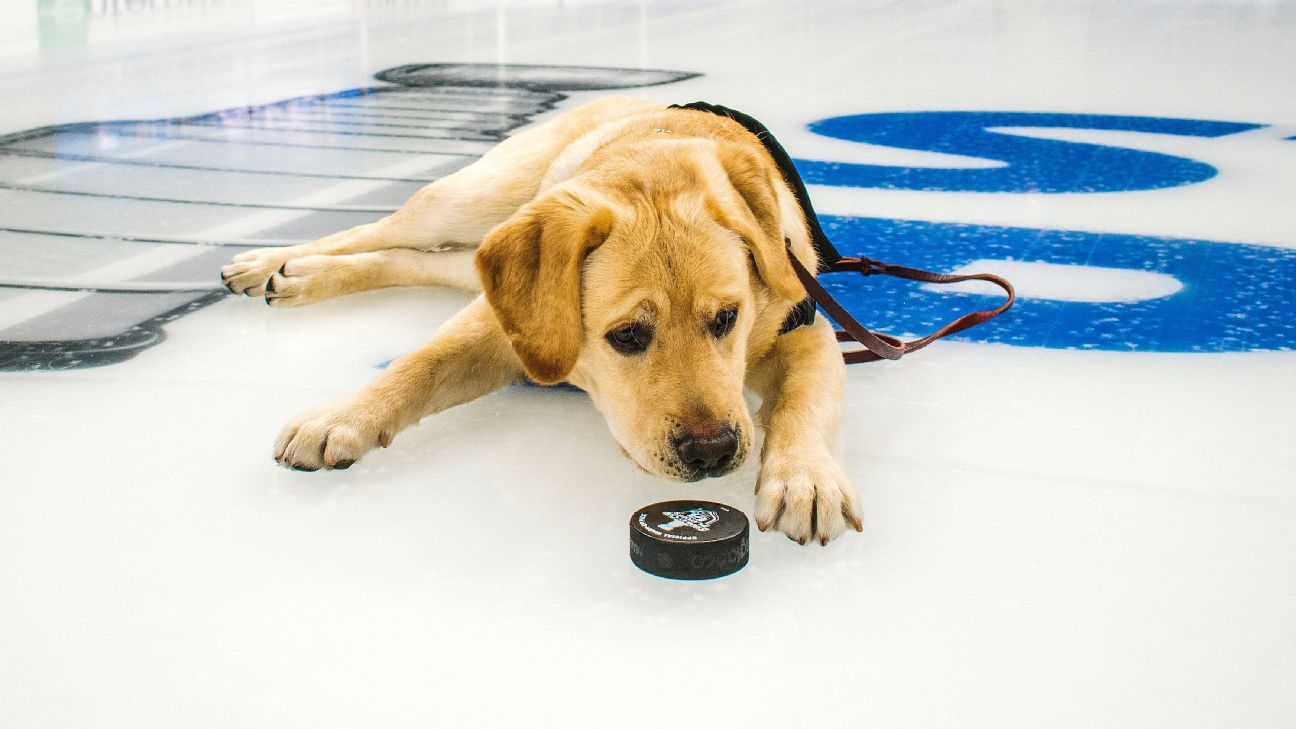 ST. LOUIS — Perhaps you saw Barclay when he made his home debut in December. Then just three months old, the yellow Labrador retriever was frolicking around the ice with the St. Louis Blues at practice, chasing and gnawing on Brayden Schenn‘s stick, carrying a puck in his teeth and, yes, slipping just a little without the proper footwear.

Or maybe you saw him on the news (his adorable exploits made SportsCenter, CNN, Fox News, TSN and TMZ). Or you began following him on Instagram (his feed, @stlouisbluespup, has 65,000 followers). Or you saw him cuddling with former Blues player Bobby Plager or flopping on the lap of NBC play-by-play man Doc Emrick in a video that was widely circulated.

Or perhaps you haven’t been introduced to him yet.

In that case, meet the good little guy whom the St. Louis Blues consider their good luck charm in a historic season that has led them to their first Stanley Cup Final in 49 years.

A cynic might wonder if Barclay is a marketing ploy. After all, in December, the Blues were reaching their nadir, sinking to last place in the NHL despite high expectations (they have obviously since turned their season around). But the Blues decided to adopt Barclay before the season, and he’s around for a greater purpose.

Barclay was born in September and taken in by the Blues when he was 3 months old. The idea to add a dog to the team? That came from Blues broadcaster John Kelly’s sister, who is a puppy raiser. She saw that the New York Rangers had brought in a dog that would eventually work with people with autism.

“And we’re an organization that likes to go all in,” said Randy Girsch, the Blues’ VP of community partnership who has the lucky job of bringing Barclay home at night. The Islanders, Senators and Canadiens are among the teams that have since followed suit and brought in office dogs.

The Blues agreed to be puppy raisers for the organization Duo, a not-for-profit in St. Louis that trains service dogs. From the moment he was born, Barclay has been around a human 24 hours a day. Duo comes in once a week to provide training assistance, but besides that, it’s up to Blues employees to train Barclay.

“Our main goal with Barclay is to acclimate him to all social situations,” Girsch said. “We need to make sure he’s really comfortable around people.”

Barclay — whose name was chosen by a fan vote in honor of former Blues player and coach Barclay Plager — will be with the team for 18 months before he graduates. Depending on his temperament, Barclay will work as a service dog for someone with a disability or serve as a courtroom dog, sitting for hours with children who are testifying in cases in which they were physically, sexually or mentally abused. Children in those situations typically have a difficult time opening up to adults — especially prosecutors — so the presence of a dog can help “because dogs don’t judge anyone,” Girsch said.

To get ready for his adult role, Barclay often walks the concourse during games — if a puppy can handle an NHL game environment, let’s face it, he can face almost anything — and mingles with players in the locker room.

Barclay has his own space carved out in the Blues’ offices at the Enterprise Center. It is essentially a pen extending from Girsch’s office door. Girsch has gotten used to having quite a few unexpected visitors throughout the day. Barclay is usually a very good boy, and he hasn’t gotten into any garbage or done anything too naughty, though he does have a penchant for eating plants.

The Blues feel good about the fact that they’re giving back, but they know Barclay has provided just as much fulfillment for them.

“If I ever have a bad day, it’s really nice to see him,” forward Ivan Barbashev said. Added Girsch: “When the players see him, they always stop to greet him. They really, really do love him.”

Over the past eight weeks of the NHL playoffs, Barclay hasn’t been around the team as much as he usually is, but it’s probably a good bet that if the Blues win two of the next three games, Barclay will be back on the ice to celebrate the franchise’s first Stanley Cup.